"Socialist Party Presidential candidate Stewart Alexander was the second candidate to issue a response. In the candidate’s email, Alexander remarks, 'The private health insurance companies always had two ideas in mind when it came to healthcare reform – either to avoid all reforms or stick the American people with bad reform. Tonight, the Supreme Court upheld the bad healthcare reform that will insure the profits of private healthcare companies at the expense of American’s access to healthcare....'"

Obama’s policy was based on the original sin of allowing the pharmaceutical companies off the hook. He then followed this up by pledging public funds to subsidize junk healthcare plans, coercing Americans into purchasing these plans and silencing the voices of single-payer healthcare advocates. Obamacare is not healthcare reform; it is just another corporate giveaway by the Obama administration.

Socialist Party USA Presidential Candidate Stewart Alexander condemned the Supreme Court’s decision to uphold the provisions of the President Obama’s Patient Protection and Affordable Care Act. Calling it a “corporate restructuring of the healthcare system in America,” Alexander pointed to the many inequities that are built into to the new system. He highlighted the need for a fully socialized healthcare system that guarantees access to high quality healthcare as a human right....

Socialist Party National Co-Chair Billy Wharton was interviewed in the Wild Wild Left Show on July 29 regarding healthcare and the 2012 SP presidential campaign. A recording of the interview can be found here.
at 5:45 AM No comments:

“The impeachment of President Lugo was a coup carried out by Conservative forces in the Congress against the will of the people of Paraguay,”

Socialist Party USA Presidential Candidate Stewart Alexander condemns the removal of the democratically elected President of Paraguay Fernando Lugo. Alexander describes the removal by Congressional impeachment as an illegitimate coup. He calls upon the Paraguayan Congress to restore President Lugo and condemns US President Barack Obama for not strongly denouncing the undemocratic maneuver.

“The impeachment of President Lugo was a coup carried out by Conservative forces in the Congress against the will of the people of Paraguay,” Alexander stated. “Despite this undemocratic action and the wishes of the US government to force out a leftist leader, there will be no going back in Latin America. The people’s voice will be heard and the popular movements in the region will restore democracy through the class struggle....”

"Howie Hawkins of New York and Jill Stein of Lexington, Maine, filed as the Green Party’s candidates; Linda Anderson Boyd of Washington and Ross “Rocky” Anderson of Utah filed as independents; Lex Green of Bloomington and Edward Rutledge of Lemont filed as Libertarians; and Alex Mendoza of Texas and Stewart Alexander of California filed under the Socialist Party USA...."

"I don't know John Strinka. We've never met. But this guy's got guts. Strinka has filed as a Socialist candidate for the Indiana House of Representatives in, of all places, District 39 - a swatch of the northern suburbs that includes parts of Carmel and Fishers. Jerry Torr is the incumbent there. He's an insurance man who voted for what Strinka calls 'Right to Work For Less' during the last legislative session.

In a press release, Strinka is touted as the first Socialist candidate in decades to qualify for the Indiana ballot. This is worth thinking about. Indiana, after all, plays a distinguished part in the short and largely forgotten history of socialism in the United States...."

The chart designates Alexander to be the only one of those candidates truly falling on the left-wing of the political spectrum, while also listing him to be tied with Rocky Anderson as the two most socially-libertarian presidential candidates among the six. 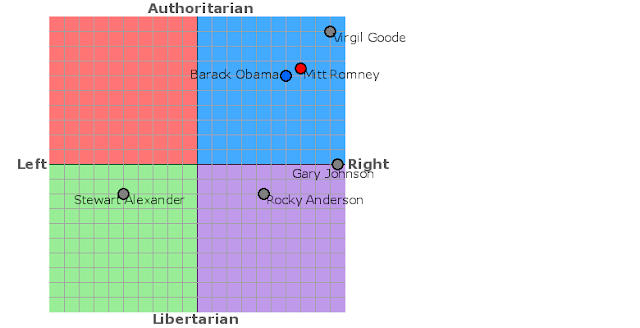 
"INDIANAPOLIS (WISH) - There's a socialist running for a seat in the Indiana General Assembly and his name will be on the ballot in Hamilton County. John Strinka is a warehouse worker who collected more than 450 petition signatures, enough to get his name on the November ballot.

As he delivered them to the state election division wearing his Socialist Party t-shirt, co-director Brad King said he's the first socialist candidate to qualify for the ballot in Indiana since the early '80's.  'I think it's a victory for American democracy,' says Strinka...."

Johnson has some appeal on the right and left

"Today financial constraints, party politics and a strong media bias about allowing anyone beyond the 'chosen' two – the candidates of the Republican and Democratic parties – makes it nearly impossible for anyone to get recognition. Did you even know that there are at least 16 other announced presidential candidates for other political parties for the 2012 election, ranging from Stewart Alexander of the Socialist Party to Jack Fellure of the Prohibition Party (they’ve been running candidates for years, by the way)...."

Click here to listen to the podcast.
at 12:20 AM No comments:

Socialist Party Presidential Ticket on the Ballot in Colorado

'We believe that working people should have a democratic process where they have a say in what takes place, not only in Washington, D.C., but also in the state of California,' Alexander said over the weekend at a yard sale fundraiser in Los Angeles. 'The corporate candidates are supported by the corporate media. And the corporations; they own both.'

Alexander has already secured the Socialist Party's nomination but is hoping to gain a spot on the Peace and Freedom Party's ballot line in California....."

"Full-fledged U.S. socialists are relatively scarce these days – three socialist-oriented presidential candidates received about 21,000 votes among them in 2008. And current socialist leaders don't share the right-wing view that Obama is a fellow traveler.

"It makes absolutely no sense," said Greg Pason, national secretary of the Socialist Party USA. Obama's health care overhaul "is anything but socialist. It's bailing out for-profit companies...."

The Socialist Party USA Presidential Candidate Stewart Alexander says that the most recent jobs report represents the bankruptcy of Obama’s economic policy. The report included an increase in the unemployment rate to 8.2% and indicates a lull in job creation for the first quarter.

Alexander proposes a public employment program that will use public funds to put unemployed Americans back to work. This plan is the opposite of the course chosen by Obama, who lavished the banks and private companies with money as a part of his bailout program....

Notes from the Editors

"J. Quinn Brisben, whose review appears in this issue of MR, died on April 17, 2012, at age 77. He ran as the Socialist Party USA candidate for President of the United States in the 1992 general election, and was a longtime activist and teacher. He was also a poet interested in cultural as well as political themes. In the 1990s he emerged as one of MR’s most treasured cultural and political reviewers, reviewing E.P. Thompson’s posthumous work on William Blake (MR, September 1994), Roxanne Dunbar Oritz’s Red Dirt (MR, December 1997), along with reviews of a number of other books...."