In some states, voters will be able to cast their vote to speak for the 99 percent and vote for Stewart Alexander for President and Alex Mendoza for Vice President. These voters will be on the frontline to revolt against a political system that is unfair and unjust; their votes will be a revolt against unfair ballot access laws that has rigged the entire political process to limit voter choice to the candidates of the two corporate parties.

A Statement by Stewart Alexander, Socialist Party Candidate for President of the United States


We are approaching the final days before the November 2012 General Election; and one year since the SPUSA nominated Stewart Alexander and Alex Mendoza for president and vice president, the Alexander/Mendoza presidential campaign has been able to reach out to millions of working people with a message of hope for real change that is only possible in a society that is established around the principles of socialism.

Click here to listen to the Podcast.
at 7:38 AM No comments:

"The Socialist Party is making a run in red-dominated Indiana.

Come Election Day, though, polls indicate the color on the maps is more likely to signal Republican victories than a throwback to Red Russia ideals.

Socialist Party presidential candidate Stewart Alexander was interviewed on the SharedSacrifice internet radio show on August 16. A recording of the interview can be found here.
at 5:58 AM No comments:

To The Nines: A lesson in politics

"In October, the Socialist Party USA nominated Stewart Alexander, a 'working man' as its candidate for president in the 2012 election. According to its Web site, www.socialistparty-usa.net, the party is a democratic socialist organization that sees socialism as 'a new social and economic order in which workers and consumers control production, and community residents control their neighborhoods, homes, and school, and the production of society is used for the benefit of all humanity, not the private profit of a few....'"

Socialist Party Indiana State House candidate Ronald Haldeman (94th dist.) was interviewed along with two other IN minor party candidates on The Light 1310AM radio (Indianapolis) on September 12.

A recording of the interview can be found here.
at 7:22 AM No comments:

My Visit With the Mayor

I've spent a good bit of time this summer with UNITE HERE, the union which is currently engaged in organizing the hotel workers of Indianapolis. After years of struggle, UNITE HERE has finally succeeded in garnering some public attention, and even some friends among the Democratic majority in City Council. As a result of this, the City Council passed the Freedom to Work bill, proposition 179 at their July 16th meeting, by a vote of (predictably) 16-12....

Solidarity with the Teachers’ Strike in Chicago!

A Statement by Pat Noble, Socialist Party Candidate for Red Bank Regional HS Board of Education

On Monday, 26,000 teachers went on strike in Chicago, IL, many of whom took to the streets in protest of sub par working conditions and benefits. The right-wing attack on educators has been widespread, with education being a constant first stop for politicians looking to balance a budget on austerity instead of having their wealthy benefactors pay their fair share. As a student, as well as a candidate for the Red Bank Regional Board of Education, I stand in solidarity with the teachers in Chicago, who are standing up, not only for themselves, but for every teacher who receives less than they deserve....

A recording of the interview can be found here.
at 6:50 AM No comments:

"A question for all of you: who was the first openly LGBT person to seek nomination for the Presidency of the United States of any political party? Fred Karger? Stephen Durham? The answer is David McReynolds
of the Socialist Party USA in 1980 and again in 2000. Another question: when did the California Democratic Party first have a same-sex marriage clause in its platform? The answer: 2008. When did the federal Democratic Party first support same sex marriage? The answer: 2012, at last...."

"On September 5, U.S. District Court Judge Rudolph Contreras, from the District of Columbia district, issued an 18-page decision about debates. The case is La Botz v Federal Election Commission, 11-1247. It says that the FEC was wrong to have dismissed a complaint filed by the 2010 Socialist Party’s U.S. Senate candidate in Ohio, Dan La Botz. La Botz had been denied participation in the U.S. Senate candidate debates, which were restricted to only the Democratic and Republican nominees. The debates had been sponsored by a consortium of eight Ohio newspapers, which are corporations. FEC rules provide that debates sponsored by for-profit corporations may exclude some candidates, but the debate sponsors must have predetermined, objective criteria as to whom should be invited....."

Special Thanks to NOW-NJ PAC for their support!

NOW-NJ PAC now supports endorsement of the Pason for US Senate Campaign! We appreciate NOW-NJ's support. They are now recommending endorsement by the national NOW-PAC! Getting a national endorsement from NOW-PAC is a huge up-hill battle, but support from NJ-NOW is a great victory for the campaign!...

The New Jersey State branch of the National Organization for Women (NOW) has officially endorsed Socialist Party candidate Greg Pason in the race for that State's 2012 elected seat in the United States Senate. 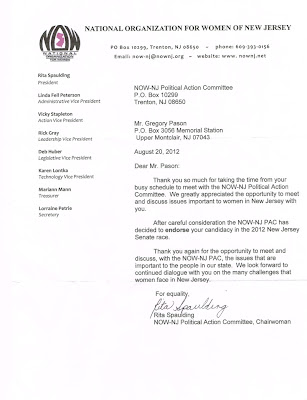